What is germ phobia?

Sometimes articulated as Mysophobia (Germophobia), a germ phobia characterises a disproportionate emotional arousal in response to a thought associated with contamination through contact with germs (whether real or imagined). Germophobia is often thought to arise in some instances of Obsessive Compulsive Disorder (OCD) however it’s possible to also have germophobia and not have OCD (or to have obsessive traits without full blown OCD).

A germ phobia (however occurring) can be time consuming (for example people might spend hours cleaning themselves) and restrict enjoyment of life at best, and be highly debilitating at worst. Reported restrictions in social and intimate relationships and career progression are common complaints, because the constitution of living around the perceived risk of contamination dominates the life of someone with germophobia. 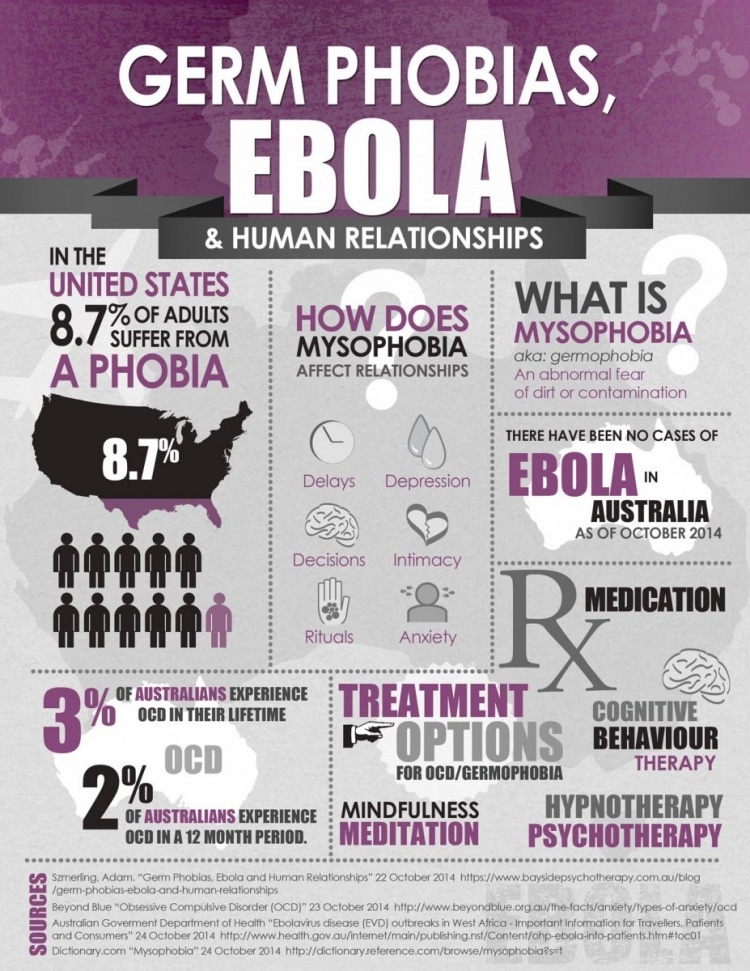 Is there such a thing as ebola phobia?

Perhaps a public backdrop to recent media coverage about the ebola virus and its possible risks was its reference in a 1995 Dustin Hoffman movie “Outbreak”, where a town became infected with the deadly disease. The movie implied ebola brings a massive infection risk because in the film, the virus could be transmitted through the air we breathe, where scenes of people coughing on planes or cinemas were common.

Some people suffering from Germophobia may well be at risk of developing an ebola phobia, especially those working in medical fields where contact is unlikely yet not completely out of the question (certain nurses, doctors or researchers).

Mainstream methodologies include pharmaceutical medication, Cognitive behaviour therapy (CBT), Mindfulness meditation, exposure treatment. Less mainstream methods include hypnotherapy on one end of the spectrum and on the other, psychoanalytic psychotherapy which is less behaviourally oriented and more focussed on the past and how the individual has constituted themselves around germs accordingly.

While it’s been challenging to locate research particular to germophobia, in the USA, specific phobias impact 8.7% of adults while OCD, which is often founded in contamination fears, occurs in 1.0% of adults.

In Australia, the lifetime prevalence for ocd in adults is 2.0%.

As stated, Germophobia afflicts not only the individual with the condition but largely, social and intimate relationships. Relationship expert, psychologist Francesca Levine reports:

A patient with Germaphobia could add anxiety about the Ebola virus to the list of potential contaminants. The impact on a relationship would be as above and possible increase in over protective behaviours. This would increase tensions in the relationship and children.

Get counselling to manage anxiety and fear. These conditions do severely contaminate the health of a relationship and are very unlikely to improve without therapy or counselling.