The Link Between Eating Disorders and Mental Health

Have you ever noticed a connection between your eating habits and your emotions?

Perhaps you’ve experienced a short burst of energy after binging on sugary foods, or felt irritable and tired after skipping breakfast.

Food can certainly affect how you feel. But the same applies vice versa. Your frame of mind can affect your relationship with food and, subsequently, your eating habits.

While the exact causes of eating disorders are complex, researchers are continuing to uncover that there are strong psychological factors involved.

Let’s dive deeper into what psychological triggers can lead to eating disorders and how to identify them early.

What are eating disorders? 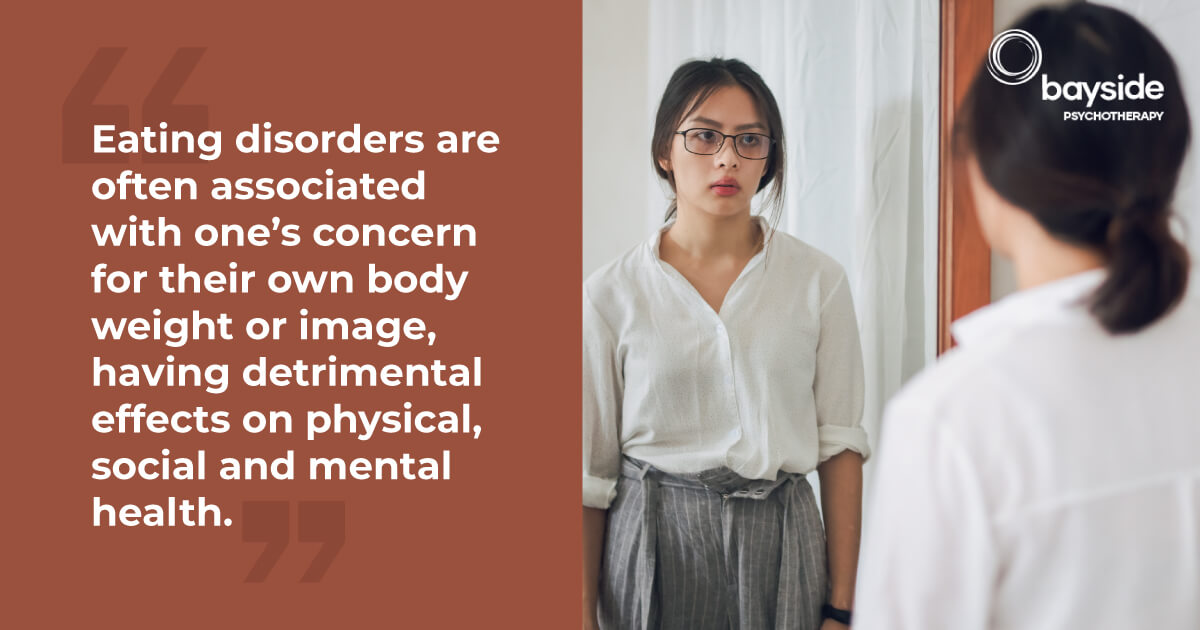 Eating disorders are often associated with one’s concern for their own body weight or image, having detrimental effects on physical, social and mental health.

Here are some of the most common eating disorders in Australia:

How serious are eating disorders?

Eating disorders affect about 1 million Australians at any given time. Usually, they take place during or right after adolescence – during a critical period of brain development. Disruptions in the brain development phase can also cause significant hindrances to growth.

However, eating disorders can affect anyone at anytime and can significantly impair one’s quality of life.

Here are a few stats on the severity of eating disorders:

These statistics outline the prevalence and severity of eating disorders and highlight the need for adequate treatment and medication. Unfortunately, while 1 million Australians are affected by eating disorders, only about 200,000 receive evidence based treatment.

Stressful events are one of the leading causes of eating disorders. Chronic stress from traumatic life events or extended emotional pain can often lead to under or overeating as a coping mechanism.

Generalized Anxiety Disorder (GAD) often causes a reduced appetite and can sometimes even lead to a complete loss of it. Zhaoping Li, MD, director at the UCLA Center of Human Nutrition says that, while there are many people who respond to stress by binge-eating, there is a significant number of people who lose their appetite when they are feeling anxious.

Substance use disorders or SUDs are issues related to drugs, alcohol, cigarettes and other such substances.

While substance use doesn’t necessarily result in eating disorders, the former can certainly trigger the latter. Unfortunately, people sometimes resort to these substances, especially methamphetamines, for weight loss.

Emotional eating is when people try to use food as comfort and to block emotions. Emotional eating has very little to do with physical hunger but instead is relied upon to satiate ‘emotional hunger’.

Hormonal changes, anxious feelings, and even minor stressful events can result in emotional eating. This happens because negative emotions can make you feel empty, and food is wrongly believed to temporarily fill the void. Consistently relying on food to make yourself feel better can create a problematic relationship with food.

Identifying the early signs and symptoms of eating disorders:

Eating disorders are complex and can arise from a myriad of psychological, social, and behavioural factors. Recognising that you have an eating disorder is the first step to treating the disorder. This is why it’s important to identify the signs of an eating disorder as early as possible.

Here are a few ways to recognise the onset of an eating disorder:

One of the earliest signs of an eating disorder is a sudden change in eating habits. For example, you may begin eating at very specific times, frequently skip meals, begin eating foods in a certain order, or become extremely fussy over what you eat.

You may develop an unhealthy obsession with food or your body weight so much that it becomes your main focus over other daily activities. You may start to worry about calories and restrict certain foods.

You may begin to notice considerable weight fluctuations, stomach cramps, or menstrual irregularities. You may begin to feel cold, find it difficult to concentrate, or experience sleep problems.

Emotionally, you may begin to feel uncomfortable eating around others and may feel a sudden desire to withdraw from social settings that you would normally enjoy. You may also experience frequent mood swings.

Eating disorders are very difficult to deal with alone and are often accompanied by low self-esteem. Early intervention is incredibly important as it is associated with the best outcomes.

Eating disorders are a very real mental health issue. If an eating disorder is ignored or avoided, it can result in severe health implications – both physical and psychological.

If you suspect that you or someone you know is suffering from an eating disorder, seek professional help. Please don’t hesitate to reach out to our qualified therapists for an initial assessment for eating disorder treatment. Please be aware that Bayside Psychotherapy clinic does not treat Anorexia Nervosa.