Bayside Psychotherapy>Blog>Bulimia: Fuelled by Social Media
As you scroll through your Facebook or Instagram feed, how often do images of people with incredible bodies pop up?

Chances are – you are confronted with images of people with thin frames or athletic physiques several times a day.

Admiring someone’s physique is perfectly acceptable. However, it can quickly become a cause of concern if you start comparing your body to theirs, taking drastic, unhealthy steps to achieve that ‘look’. 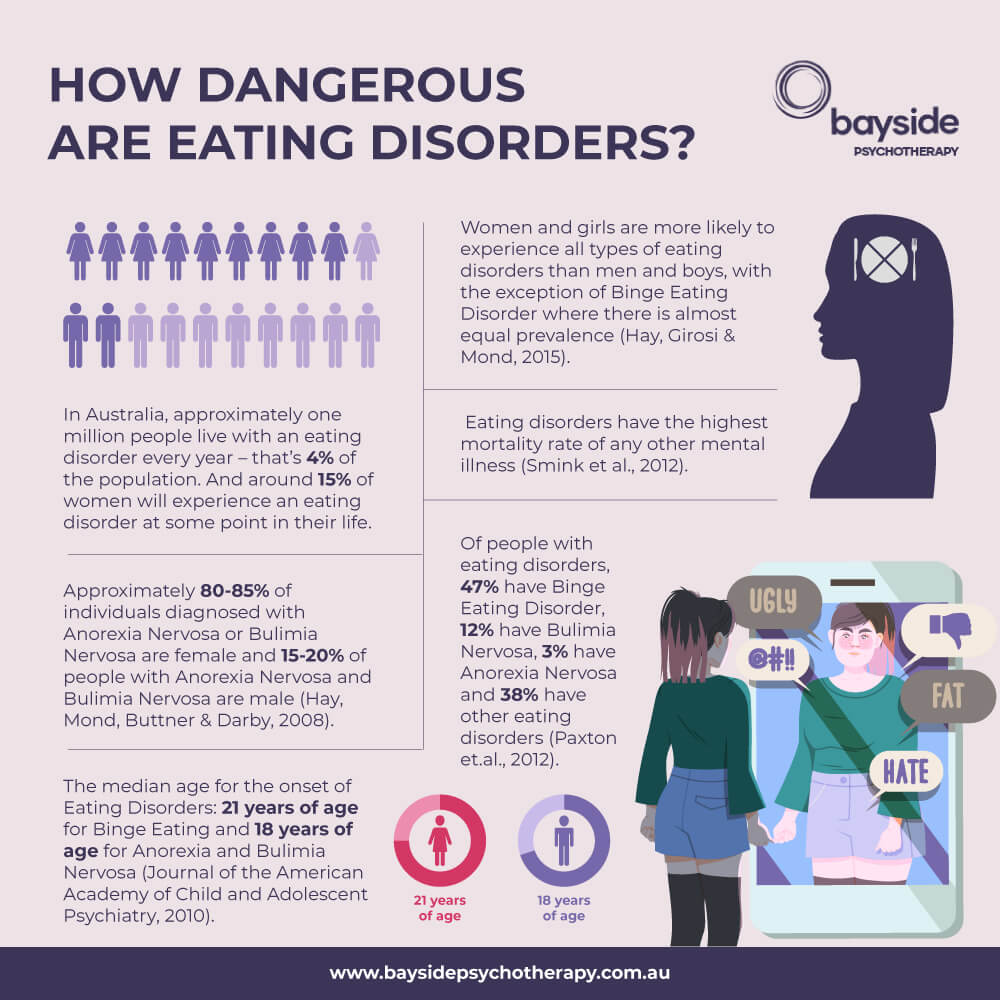 Over time, this may turn into an eating disorder, affecting your physical and mental health. Today, it seems that social-media fuelled eating disorders are becoming increasingly common.

This is why we think it’s important to discuss this issue.

But before we do that, let’s cover some statistics on eating disorders.

It’s important to recognise that males are also largely affected by this issue. According to the Eating Disorders Resource Catalogue2014, a quarter of those with anorexia are male and are at an increased risk of dying due to delayed diagnosis.

Clearly, this is a huge issue.

According to a study by Flinders University and the University of Western Australia, the more social media sites a teenager uses – and the more time spent on them, the more likely they are to suffer from disordered eating. Although this study focussed on year 7 and 8 students, this likely extends to the adult population.

How Dangerous are Eating Disorders?

According to the Eating Disorders Coalition, 2016, a person dies every hour due to an eating disorder.

Eating disorders increase the risk of premature death due to medical complications and are also linked to an increased rate of suicide.

Smink et al., (2012)found that eating disorders have the highest mortality rate of any other mental illness.

So, eating disorders, left unaddressed, can be extremely dangerous. 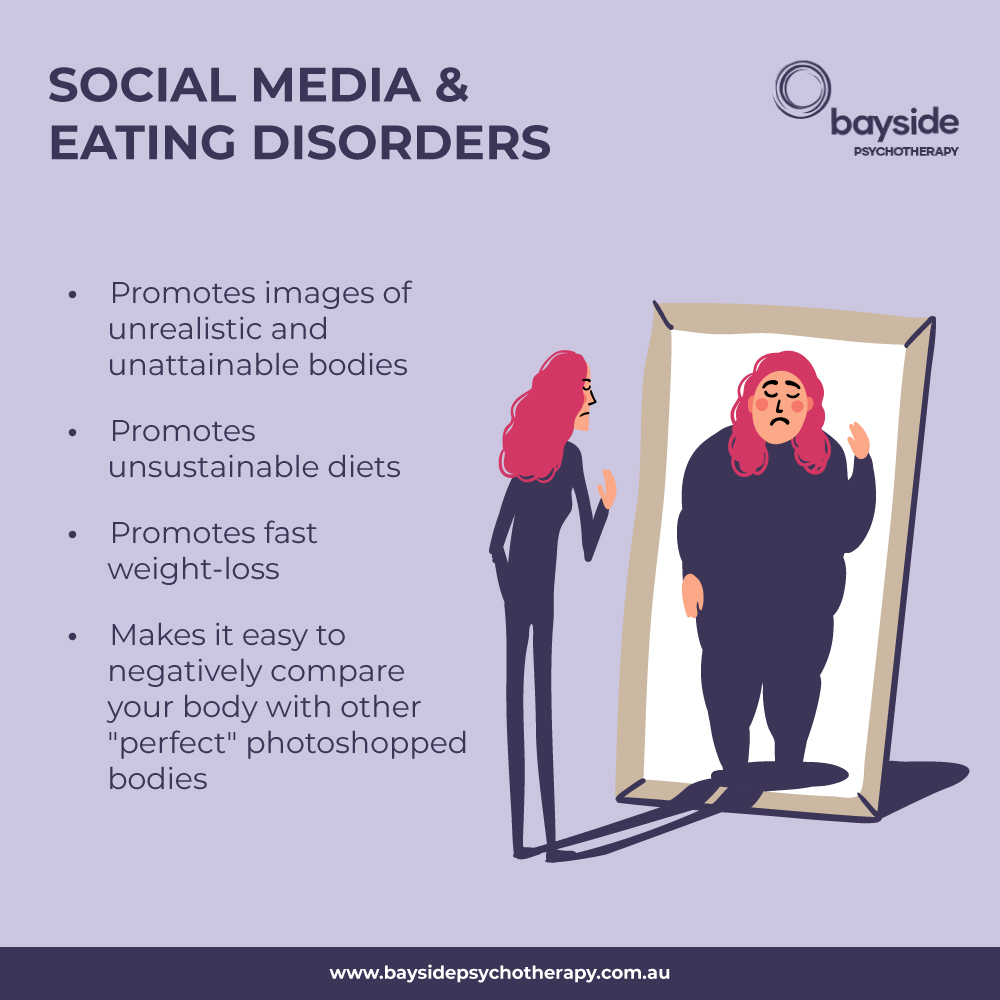 As we mentioned earlier, social media can contribute to an unhealthy relationship with food and eating disorders.

Social media can affect your thoughts, perceptions and make unhealthy fads seem “normal. There are thousands of accounts on Instagram, Facebook and other social media channels that advocate for healthy diets and active lifestyles.

This isn’t the problem.

The issue is when these pages promote images of unrealistic and unattainable bodies along with unsustainable diets. An issue also arises when value is constantly placed on attractiveness.

In Western Society, attractiveness and ‘being skinny’ has long been aspired to. Take Barbie, for example; for years this doll was portrayed as having the ideal body type. In 2013, the Daily Mail revealed that if she were a real person, she would not even be able to carry herself around due to her disproportionate body. What sort of message was this doll sending to our children? With advanced technology and the rise of social media, Barbie has now been replaced with thousands of Instagram images instead.

As consumers, we need to stop comparing ourselves to these unrealistic images. If weight loss is the goal, we need to take a hard look at the reality of healthy dieting.  We need to understand that many of these pictures we see on social media are either photo-shopped or the result of years and years of hard work (not a fad or extremely low-calorie diets). Additionally, some of these social media influencers may appear healthy, but may be far from it.

According to a report (the result of an enquiry set up by the British Fashion Council), Dr. Adrienne Key, a psychiatrist said that bulimia is the most common disorder among models, estimating that about 20% to 40% of fashion models experience an eating disorder.

Comparing your body to these images may lead to the development of physical and mental disorders.

If we earned a dollar every time we saw an advertisement or promotion claiming that a fad diet or weight loss machine could get you that desirable waist or rock-hard abs, let’s just say we’d be very rich.

Social media advertisements are extremely clever these days. With our reduced attention spans, advertisers have to get your attention quickly!

This is why images of incredible and often unattainable bodies are used. They stop the scroll! They get your attention first, then they sell you on the product or program.

It’s important to understand that body image concerns and eating disorders are not purely a result of the social media age. Many celebrated personalities have dealt with all sorts of eating disorders in the past, from anorexia to to binge eating.

In 1994, Princess Diana of Wales publicly spoke of her issues with bulimia. She was a great role model in that she encouraged those who were suffering to seek professional help and support. This moved many people to speak up about their own struggles and experience with disordered eating.

Lady Gaga is another celebrated personality who has dealt with anorexia and bulimia since she was 15. The renowned pop singer opened up about her fight against bulimia in 2012. Her ‘Born This Way Foundation’ provides resources to help people deal with eating disorders, addiction and other such issues.

As we can see, eating disorders can affect anyone and everyone, especially when we’re constantly refreshing our feeds, and being exposed to content that doesn’t always make us feel good about ourselves.

Here’s a checklist on how you can protect yourself online. 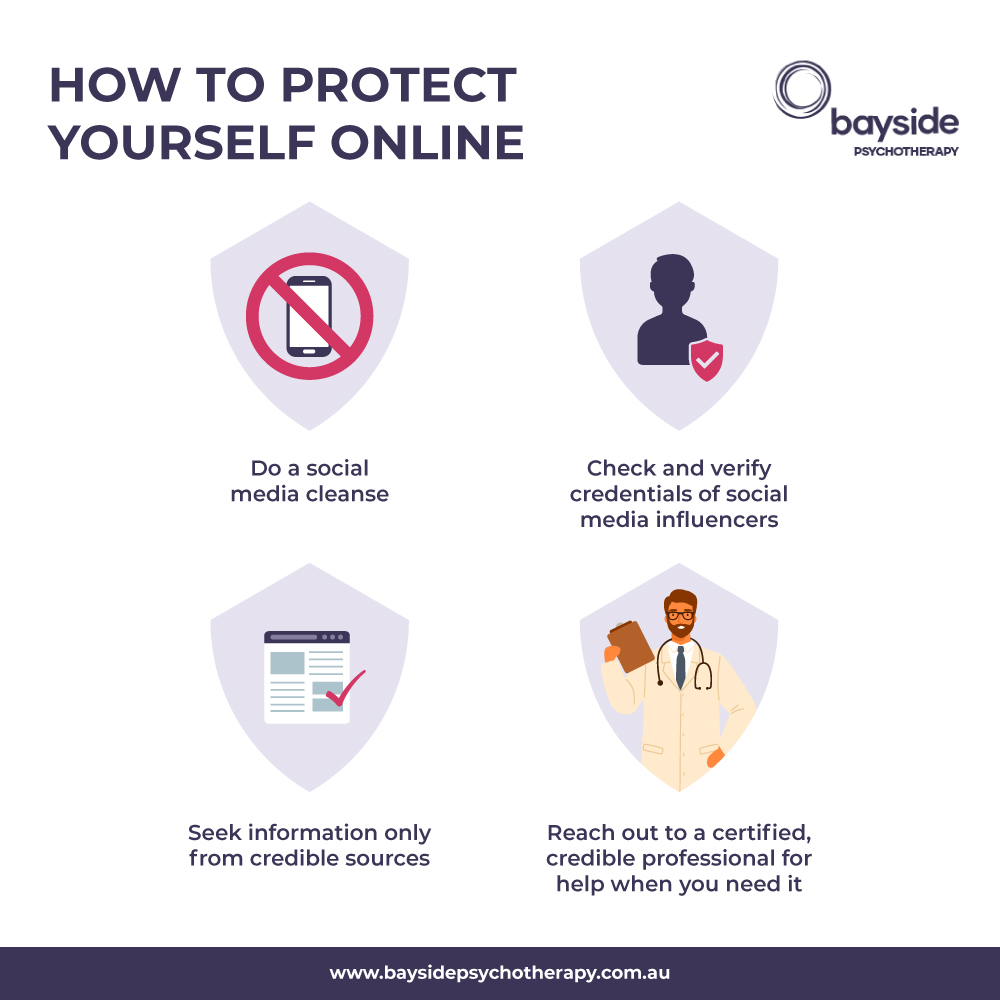 1. Do a social media cleanse

Take some time to check out who you’re following on the social media platforms that you use regularly. Make a conscious effort to unfollow channels that make you feel uncomfortable about your body and those that make you feel any less than the amazing person you are. The lesser you engage with such profiles, the better you’ll be able to protect your mental health.

While the online world has become a huge space for talented creators, it has also become increasingly easy for anyone and everyone to pose as a fitness or weight loss guru, giving advice on how to lose weight and get fit. But, unfortunately, some of these influencers may not have the adequate knowledge to be providing diet or fitness plans and tips. Sure – their method may have helped them, but there’s a chance it may not work for you, or worse -it could negatively impact your health.

3. Seek information only from credible sources

Instead of looking for meal plans on Instagram or Google – reach out to a certified nutritionist. Often, online algorithms track your activity and will show you ads pertaining to your online searches. So, the more you look for fitness-related content and diets, the more likely you are to get ads from accounts promoting these things. Depending on how good their marketing is – you may feel compelled to click on that ad, and before you know it, you’ve forked out for that fad diet or course.

So always reach out to a certified, credible professional for help when you need it.

Feel free to speak to one of our professional therapists for eating disorder treatment. You can link up through a confidential and secure video conferencing session – anywhere in Australia. Professional help is just a click away. All you need to do is reach out.