The Influence of Age and Gender on Eating Disorders

When reading this article, remember – although age and gender may impact one’s chance of being diagnosed with an eating disorder, eating disorders can affect anyone at any time. 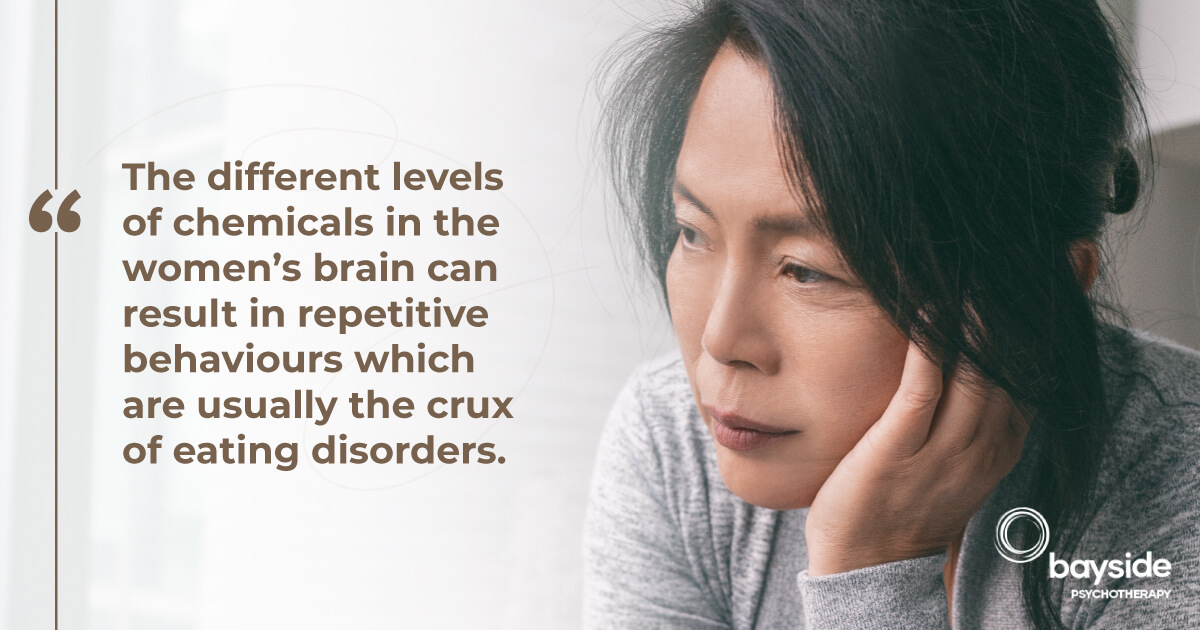 Eating disorders have existed for a long time, with the first case of anorexia nervosa identified in the UK in 1689. Over the years, historical records and research have concluded that the risk for developing a specific eating disorder can be significantly affected by age and gender.

Eating disorders have a higher prevalence among younger people. However, older age does not prove a barrier to disordered eating and comes with a unique set of challenges.

Women are disproportionately affected by eating disorders relative to men. Furthermore, recent research has indicated that gender nonconforming individuals also appear to be at a heightened risk of developing an eating disorder.

Before we dive deeper into the specifics of how gender and age can affect eating disorder risk and what treatment options are available – let’s define what an eating disorder is.

What is an eating disorder?

An eating disorder is defined as a severe mental health disorder. There are many different eating disorders with unique signs and symptoms. However, eating disorders are generally recognised by abnormal eating behaviours that negatively affect a person’s life. These abnormal behaviours can be quite difficult to identify but often involve a preoccupation with eating, food, body shape, weight and/or exercise.

These abnormal eating behaviours affect the consumption and absorption of food impacting an individual’s physical and psychosocial wellbeing.

No one specific cause leads to someone developing an eating disorder. Instead, eating disorders often arise due to a complex interaction of socio-cultural influences, biological and genetic predispositions and psychological risk factors.

Sometimes an eating disorder is triggered by a specific life event. In addition, individuals are often susceptible to a particular set of triggers that are unique to them.

These triggers often involve the experience of trauma that leads to overwhelming negative emotions.

Common triggers for an eating disorder can include the loss of a loved one, early-life trauma, relationship issues, social pressure, low self-esteem, substance abuse and anxiety.  Eating disorders may also be set off by beginning a new phase of life, such as when one falls pregnant or starts a new job.

What is the relationship between gender and eating disorders?


Gender plays a vital role in shaping how people behave in society. Despite the world becoming more inclusive over the last two decades, there are still prevailing gender ideals that fundamentally affect people’s behaviour.

The rise of social media has undoubtedly played a major role in highlighting these gender ideals. For example, the societal ideal image of a male is often promoted through social media as someone with a robust and muscular frame. For women, it has stereo typically become a slim and toned body.

Although gender ideals are becoming more fluid, epidemiological studies have identified that the incidence of eating disorders has increased proportionally alongside social media.

According to research, women are at a greater risk of being affected by an eating disorder in relation to men. Recent evidence points to the idea that women may be disproportionately affected by eating disorders due to the chemical makeup of their brains. Researchers from York University in the UK found that women are more likely to experience brain activity relating to negative perceptions than men.

Understanding the correlation between age and eating disorders 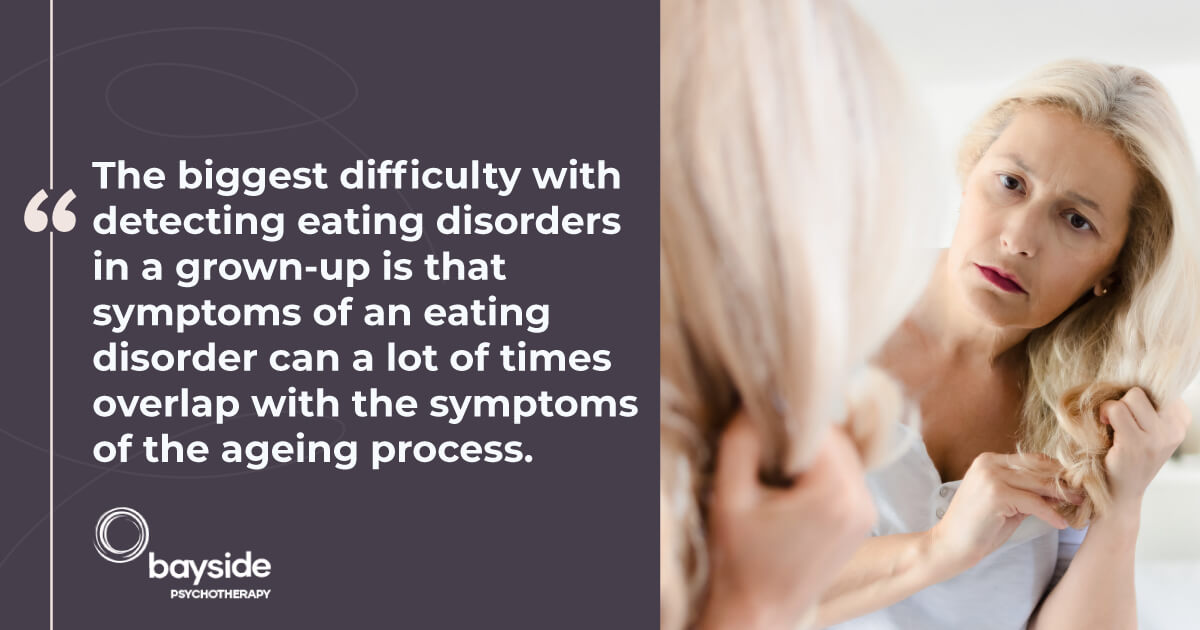 Do people grow out of eating disorders?
While eating disorders are often believed to occur during adolescence due to body image issues, this isn’t entirely true. As Prof. Bulik, founding director of the University of North Carolina Center of Excellence for Eating Disorders, says:

“People fail to recognize that eating disorders can strike people of any age. They think that people magically grow out of eating disorders when they leave adolescence. Nothing could be farther from the truth.”

Although most studies focus on teenagers or those below the age of 30, plenty of evidence shows that eating disorders affect those of all ages. Often, those who have recovered successfully from eating disorders as teenagers experience relapses when they get older.

The biggest issue with detecting eating disorders in adults is that the symptoms of an eating disorder often overlap with those symptoms of the ageing process. For instance, older people may take medication that induces vomiting as a side effect. They may also have physical ailments that hinder them from consuming a proper diet. Therefore, eating disorders can easily go unnoticed and undiagnosed among the older population.

The main problem with eating disorders in older adults is their potential to completely dampen the immune response and mess up the body’s functioning. While this can be manageable in teens and young adults, it can often have irreversible repercussions in older adults.

Additionally, common ailments in older adults such as heart problems, obesity, gastrointestinal problems and osteoporosis often worsen when it coincides with an eating disorder. 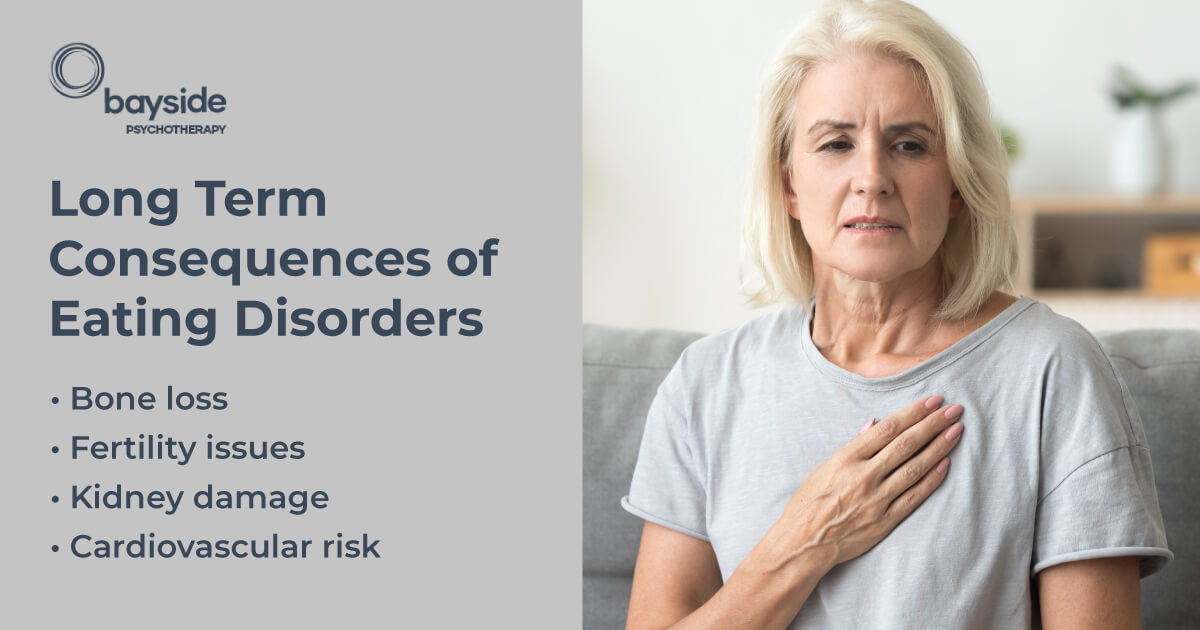 Long Term Consequences of Eating Disorders
Eating disorders are serious illnesses and have the potential to be life-threatening. The longer an eating disorder goes untreated, the greater the chance it will permanently negatively impact the body.

Bone loss: eating disorders that result from undereating (such as anorexia nervosa and bulimia nervosa) can lead to early-onset osteoporosis.  Osteoporosis is a condition that causes your bones to become brittle and more prone to fractures or breakage. Young women with eating disorders are at a high risk of experiencing bone problems later in life.

Fertility: Not taking in enough calories and nutrients often results in low levels of body fat which in turn, has a significant impact on the body’s hormones. This often results in irregular menstrual cycles, which can reduce the quality of a women’s eggs. In severe cases, an eating disorder can even lead to ovarian failure, greatly reducing your chances of a healthy conception.

Kidney damage: The development of chronic kidney disease is associated with several eating disorders, including anorexia nervosa. Starvation can lead to extreme vitamin deficiencies and electrolyte imbalance which essentially shuts off the kidneys – hindering their ability to remove toxins from the body. In severe cases, patients may require a kidney transplant or be put on dialysis.

Cardiovascular Risk: Those who suffer from binge eating disorders have an increased risk of becoming obese and experiencing cardiovascular problems, including high blood pressure and heart disease.

Statistics around eating disorders related to age and gender:

– Binge eating disorder is the most common eating disorder in Australia. Bulimia exists among 3.5% of all women and occurs due to a loss of control while eating and 2% of all men due to accidental overeating.

Treatment of any eating disorder is extremely delicate and subjective. Treatment plans should be personal and adapted to one’s age, gender, and identified triggers. However, here are three general methods that are widely used to treat eating disorders. 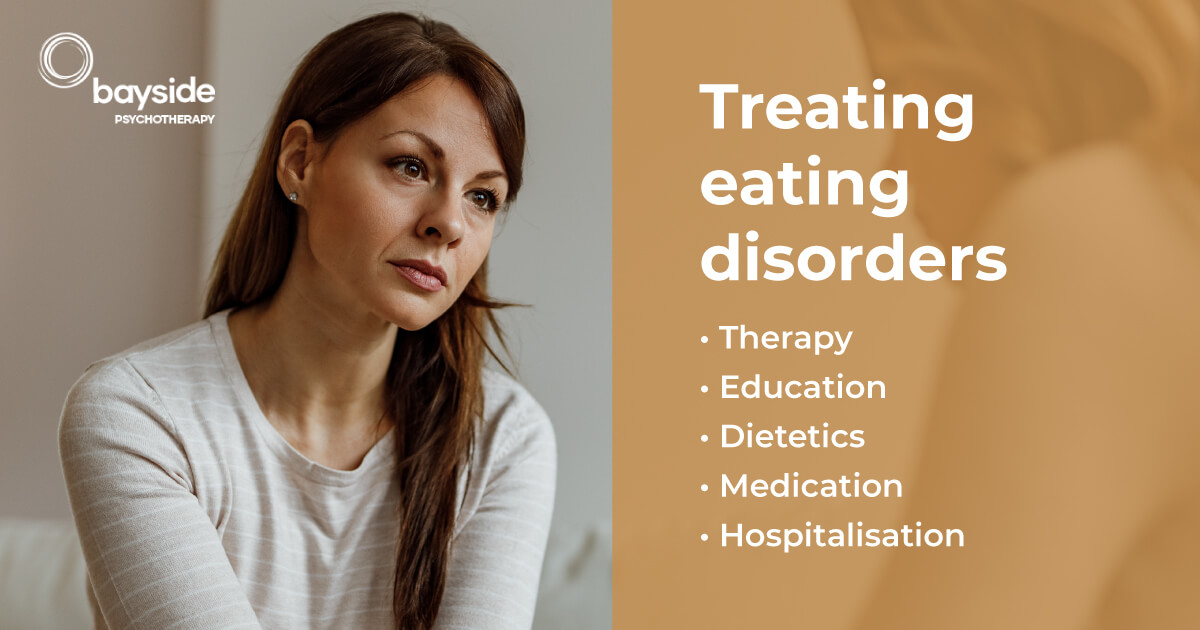 The typical way of treating eating disorders usually involves a combination of these methods. 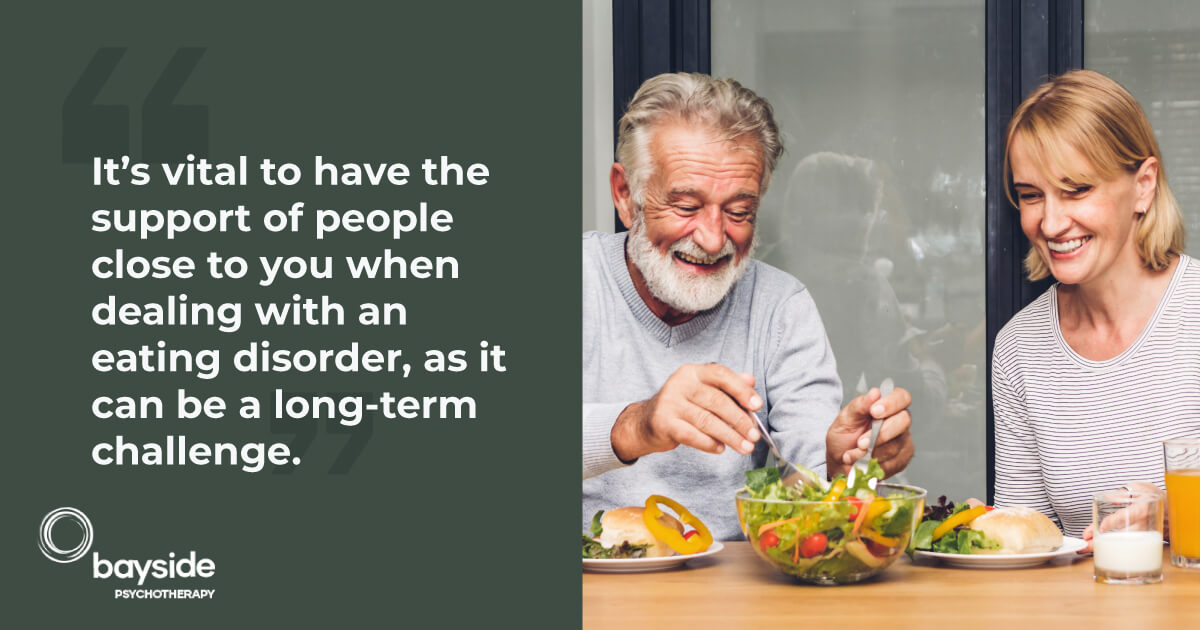 Identifying whether you or someone close to you is suffering from an eating disorder can be difficult. However, early identification is essential to reducing the severity, duration and impact.

If you or someone you know has been dealing with an eating disorder, know that you are not alone. Our professional therapists are always available and willing to guide you on the road to recovery.

Here are a couple of blogs written on this topic you might find useful: